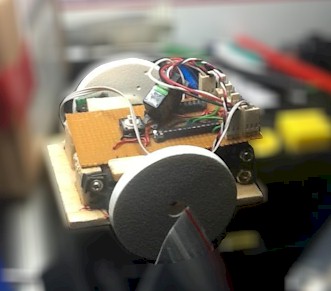 MK1 was the very first micromouse chassis I built. Made from balsa wood and 2 servos that I adapted to continuously rotate. I found the chassis when I was having a tidy-up of micromouse bits. I might add some sensors and at least make it into a wall follower!

A radio-controlled car or plane uses servo motors to control steering etc. The radio transmitter sends out a signal based on the position of the joystick. The further left or right the joystick is moved, the greater the response is expected from the servo. This gives proportional control.

The signals are received and passed to the servo. The servo has a small motor connected to a set of gears giving the motor more torque. Inside the servo is a variable resistor connected to the output shaft of the gears. The servo tries to match the value of the resistor with the decoded request from the joystick. If the joystick is moved a little way to the right, the servo motor is switch on to turn right until the position of the resistor matches the small movement of the joystick. The motor accelerates and decelerates to match the position. If the joystick moves a large distance quickly, the motor speeds up to full speed to move the resistor to the appropriate setting. Again, with the model plane, a big quick movement on the joystick makes the control servo move quickly to the maximum position thus giving a proportional movement. A small movement of the joystick makes the servo move a small distance slowly.

The upshot of all this is that you end up with a motor and gearbox combination that you can control the speed and direction of. Simply simulate the joystick signals from the chip to the servo.