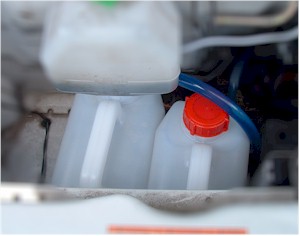 The water system starts with a 10 Litre water container under the bonnet. There is ample space under there for a container of that size - in fact at one time I had two of them under there.

There is a submersible pump in the container. This is connected with a water hose to the tap on the kitchen unit. It goes under the van, and comes up through one of the two holes that are already in the floor of the van (see floor section) - under the cupboard.

Power to the pump comes from the power pack via it's own fuse in the additional fuse box, and is switched on and off by a micro-switch that is built into the tap. 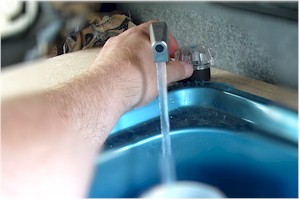 Water from this tank is usually used as sort of "grey" water - used for washing up etc or used after boiling. At the moment, another thing on the "to do" list is to make a better top for the container. I always carry fresh water for drinking in drinks bottles. (The sink appears blue here as it is still in it's protective plastic coating). Beware if you use the burners whilst the blue plastic is still attached. Where the hot metal touched the plastic, it welded the plastic to the cooker. This took quite a bit of effort to remove without scratching the stainless hob top!.

The Kitchen
The Furniture & Storage